Why is Coffee Called ‘a Cup of Joe’?

There are a few theories for how “coffee” came to be known as “joe.” Over its history of popularity in Western culture, coffee has attracted nicknames such as “java” and “joe.” Unlike the origins of the term “java,” how the beverage came to bear the name of “joe” is still a bit of a mystery. (The nickname “java” became popular in the 19th century, when the primary source of the world’s coffee was the island of Java in Indonesia.)

There are two strong theories for how “coffee” came to be “joe,” but unfortunately, neither are verifiable. The first suggests that “joe” is a corruption of one of two other slang words for coffee: java and jamoke, the latter itself a compression of java and mocha. Under that theory, a “cup of jamoke” could easily have slip-slid its way into being a “cup of joe.”

The second claims that since “joe” is slang for a “fellow, guy, chap” (the earliest sighting of its being used that way dates to 1846), that a “cup of joe” thus means the common man’s drink. The English language is replete with instances of “joe” being used to denote a typical guy who is wholly interchangeable with any other guy in the same line of work or area of special interest: “G.I. Joe,” “Holy Joe” (a chaplain or especially sanctimonious person), “Joe College,” “Joe Blow,” and of course “the average joe.” “Cup of joe” therefore would be the stuff that fuels the common man. 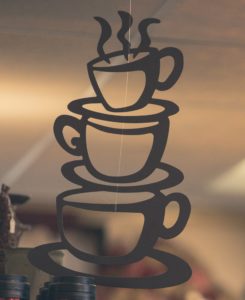