The History of Coffee

Coffee is the second-most traded commodity in the world, behind only petroleum, and has become a mainstay of the modern diet. From distant, tropical islands to the power centers of international trade, coffee has been banned, berated, hailed and championed, generating as much fear as enjoyment. Coffee touts a rich, deep history and is believed to have originated around 850AD. Here are some interesting facts about the history of coffee:

Coffee may have been discovered by ‘excited goats’ [850ad]

Legend has it that Kaldi, a lonely goat herder in ninth-century Ethiopia, discovered the energizing and invigorating effects of coffee when he saw his goats getting excited after eating some berries from a tree. Kaldi told the abbot of the local monastery about this and the abbot came up with the idea of drying and boiling the berries to make a beverage. He threw the berries into the fire, whence the unmistakable aroma of what we now know as coffee drifted through the night air. The now roasted beans were raked from the embers, ground up and dissolved in hot water: so was made the world’s first cup of coffee.

The abbot and his monks found that the beverage kept them awake for hours at a time – just the thing for men devoted to long hours of prayer. Word spread, and so did the hot drink, even as far afield as the Arabian Peninsula.

A Yemenite Sufi mystic named Ghothul Akbar Nooruddin Abu al-Hasan al-Shadhili also has a claim to the discovery of coffee: he is said to have spotted berry-eating birds flying over his village unusually energetically. On tasting some jettisoned berries, he too found himself unusually alert.

Though the stories of Kaldi and Ghothul cannot be proven to be true, one thing is certain: coffee came from Ethiopia.

It was brewed by a saint from Mocha

An alternative story has us believe that coffee was first discovered by a sheik named Omar, disciple to the Sufi mystic cited above. While in exile from Mocha (Arabia Felix in present-day Yemen), Omar, who was famous for his ability to cure the sick through prayer, lived in a desert cave near Ousab. Somewhat hungry, Omar one day chewed some berries only to find them bitter. He roasted them but this only made them hard; finally, he tried boiling them, resulting in a fragrant brown liquid which, in an instant, gave him unnatural and exceptional energy and allowed him to stay awake for days on end. His ‘miracle discovery’ was held in such great awe that he was allowed to return home to Mocha and was elevated to sainthood while coffee percolated throughout the Arab world. Due to coffee’s growing popularity and the shipment of coffee from the port city, Mocha became synonymous with coffee.

So, any time you hear the term “mocha,” when talking about coffee, you now know where that term originated.

By the 16th century, coffee was the beverage of choice in Persia, Egypt, Syria and Turkey, its reputation as the ‘wine of Araby’ boosted no end by the thousands of pilgrims visiting the holy city of Mecca each year from all over the Muslim world. Yemeni merchants took coffee home from Ethiopia and began to grow it for themselves. It was prized by Sufis in Yemen who used the drink to aid concentration and as a spiritual intoxicant. They also used it to keep themselves alert during their nighttime devotions.

From the Middle East the popularity of coffee soon spread through the Balkans, Italy and to the rest of Europe, east to Indonesia and then west to the Americas, largely through the Dutch.

Coffee was so powerful a force that it forged a social revolution. Coffee was drunk in the home as a domestic beverage but, more significantly, it was also drunk in the ubiquitous public coffee houses – qahveh khaneh – which sprang up in villages, towns and cities across the Middle East and east Africa. These coffee houses soon became all the rage and were the place to go to socialize. Coffee drinking and conversation were complemented by all manner of entertainment: musical performances, dancing, games of chess and, most crucially, gossiping, arguing and discussing the breaking news of the day (or night). These coffee houses soon became known as ‘schools of the wise’, the place men went to if they wanted to know what was going on in their world. The link between coffee and intellectual life had been established.

It was believed that coffee was ‘sinful’

Coffee, like alcohol, has a long history of prohibition, attracting fear and suspicion and religious disquiet and hypocrisy. Had the zealots (of all religions) got their way then there would not be very many coffee houses open today.

Coffee drinking was banned by jurists and scholars meeting in Mecca in 1511. The opposition was led by the Meccan governor Khair Beg, who was afraid that coffee would foster opposition to his rule by bringing men together and allowing them to discuss his failings. Thus was born coffee’s association with sedition and revolution. It was decreed sinful (haraam), but the controversy over whether it was intoxicating or not raged on over the next 13 years until the ban was finally rescinded in 1524 by an order of the Ottoman Turkish Sultan Selim I, with Grand Mufti Mehmet Ebussuud el-İmadi issuing a fatwaallowing coffee to be drunk again. Beg was executed for his troubles by cmmand of the Sultan himself, who further proclaimed coffee to be sacred. In Cairo there was a similar ban in 1532; coffee houses and coffee warehouses there were ransacked.

Coffee was known as ‘the devil’s cup’

It did not take long for coffee to travel the short distance to the European mainland where it was landed first in Venice on the back of the lucrative trade the city enjoyed with its Mediterranean neighbors. Initially, however, coffee met with the suspicion and religious prejudice it had suffered in the Middle East and Turkey. The word on the street, filtering back from intrepid European travelers to the mysterious and mystical lands of the east, was of an equally mysterious, exotic and intoxicating liquor. To Catholics it was the ‘bitter invention of Satan’, carrying the whiff of Islam, and it seemed suspiciously like a substitute for wine as used in the Eucharist; in any event, it was outlawed.

Such was the consternation that Pope Clement VIII had to intervene: he sampled coffee for himself and decreed that it was indeed a Christian as well as a Muslim drink. On tasting it, he wittily declared: “This devil’s drink is so delicious… we should cheat the devil by baptizing it!” From then on, coffee has been dubbed the devil’s drink, or the devil’s cup.

Coffee came to England in the mid-17th century

According to Samuel Pepys, famous English diarist who provided his readers with fly-on-the-wall accounts of English life during the 17th century, England’s first coffee house was established in Oxford in 1650 at The Angel in the parish of St Peter in the east, by a Jewish gentleman named Jacob, in the building now known as The Grand Cafe. London’s first coffee house opened in 1652 in St Michael’s Alley, near St Michael at Cornhill’s churchyard.

For Pepys – and for many other literate men – the coffee house was his newspaper–his phone–his internet.

By 1675 there were more than 3,000 coffee houses in England alone. Some even had bed and breakfast for overnight guests. There were up to 57 different Turk’s Head coffee houses, many of which seemed to follow the Turkish coffee house business model.

Coffee was claimed to be a 17th-century ‘Viagra’

Unless they were prostitutes, women were excluded from coffee houses and they let their resentment be known: in An Essay in Defence of the Female Sexin 1696, an indignant Mary Astell wrote: “A coffee house habitué is someone who lodges at home, but he lives at the coffee-house. He converses more with newspapers, gazettes and votes, than with his shop-books, and his constant application to the publick takes him off all care for his private home. He is always settling the nation, yet could never manage his own family.”

Astell was merely chiming with all the other wives left at home with their chores and cups of tea; in 1674 there had been the vitriolic The Women’s Petition Against Coffee, in which wives argued that their husbands were forever absent from the home and family, neglecting their domestic duties – “turning Turk”, and all for “a little base, black, thick, nasty, bitter, stinking nauseous puddle water”.

In 1714 the Dutch decided to extend their generosity in a way that would change the [coffee growing] world forever.

The Mayor of Amsterdam gifted King Louis XIV of France a young coffee plant (though the Dutch could not cultivate coffee plants in Holland, they could keep them alive in special greenhouses).

This plant was protected in the Royal Botanical Gardens of Paris.

A captain of the French Navy, Gabriel Mathieu de Clieu was stationed in Martinique but happened to be visiting Paris. It’s unclear whether he ended up stealing clippings from King Louie’s [secured] coffee tree or if King Louie himself gave order for de Clieu to establish a coffee plantation in Martinique.

Regardless, de Clieu took his clippings and set sail for the Caribbean, which happened to have the ideal coffee growing conditions.

It was a long journey and de Clieu struggled to keep his plant alive. Water was scarce on the boat but he managed to keep the plant alive by giving it his own supply of water and often going thirsty himself.

Upon arriving on the island, he secretly planted it among other plants to keep it safe.

Within 3 years coffee plantations spread throughout Martinique, St. Dominique and Guadalupe. These would be the plants that would eventually populate the rest of the Caribbean and Central and South America.

In 1730, the English Governor of Jamaica, Sir Nicholas Lawes brought coffee plants to his island. Within a short time, coffee was growing deep into the Blue Mountains, an exceptional growing area for coffee.

So how did it all get started?

A Brazilian colonel by the name of Francisco de Melo Palheta was sent to Guyana to settle a dispute between the Dutch and the French in 1727. His priority, however, was to get coffee and bring it back to Brazil, whatever the cost.

The Brazilian colonel requested coffee seedlings from the French Governor.

When his request was refused, his seductive back up plan came into play. He worked his magic on the French Governor’s wife and eventually she managed to secretly give Francisco a handful of clippings.

He took these clippings back to Brazil and thus began the largest coffee empire on the planet. In 1852 the country became the largest producer of coffee and has remained to this day.

America’s journey with coffee started with the Boston Tea Party and the American Revolution in 1773.

A group of patriots, many dressed as American Indians, snuck aboard English Tea ships sitting in the Boston harbor and dumped all of the tea into the ocean to rebel against the English tax on tea!

Thus, tea became extremely unpatriotic and coffee replaced it as the American beverage of choice. Ever since then, the United States has been the leading importer of coffee and continues to buy far more coffee than any other country.

This countrywide dependency on the beans has been an economic stimulus to many countries throughout South and Central America.

Coffee: A Drink for the Devil written by Paul Chrystal
Wikipedia
Homegrounds.co
The History of Coffee by Professor Peaberry (gocoffeego.com) 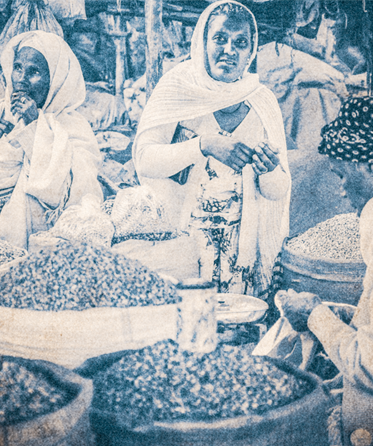